The history of Saffron

Saffron, from the pistil of the sativus Crocus, is one of the most expensive ingredients in history. The word saffron comes from the Persian za'faran, which means "yellow".

It is saffron that can be found in paintings of mammoths in Iraq (more than 50.000 years ago). The Sumerians used it for magic ( 5000 BC ). In the Bible, we find one of the oldest written traces of this spice (Psalm of Psalms 4-13 ), which lauds its aroma. The medicinal properties of saffron are inscribed in an Egyptian papyrus dated 1500 BC.

Saffron is also an Assyrian symbol of purity: only young virgins were permitted to harvest it. The Phoenician traders were the ones who spread saffron throughout Europe and it has been used as perfume, medicine, as well as a spice and a dye. And more recently, Michelangelo used saffron to paint the Sistine Chapel.

The 14th century Mediterranean pirates preferred to plunder saffron boats rather than those carrying gold, which prompted the merchants of Basel to grow their own. This made the Swiss town one of the richest cities in Europe, in only a few short years.

Today, the biggest share of worldâs production (300 tons a year) comes from a wide belt extending from the Mediterranean Sea to western Kashmir, to the east. Iran, Spain, India, Greece, Azerbaijan, Morocco and Italy dominate this market in that order, around the world, with Iran and Spain totaling nearly 80% of total production, with Iran actually providing 96% of the worldâs production. 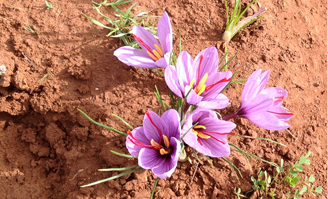